In the bleak ‘cabin-fever’ days of last winter I decided that sooner than go for another soaked to the skin Pike fishing day, I would tidy up the iPhoto file on my Apple Mac. I went back 18 months where my last tidy up had finished and gradually worked my way forward. Did I really need to keep that shot of me holding yet another small Trout or the first course of a particularly good meal consumed during a long weekend in France? Gradually more and more pictures were dumped in the trash file. Then I found a shot of a fly that not only brightened the winter gloom, but also kept me at my tying vice through those long winter evenings. It also set me on the trail of a technique that I had never seen before, and was finally responsible for me catching my best fish of last season. The fly was ‘Ulf’s Killer’ and I had taken the shot at the 2010 Dutch Fly Fair. 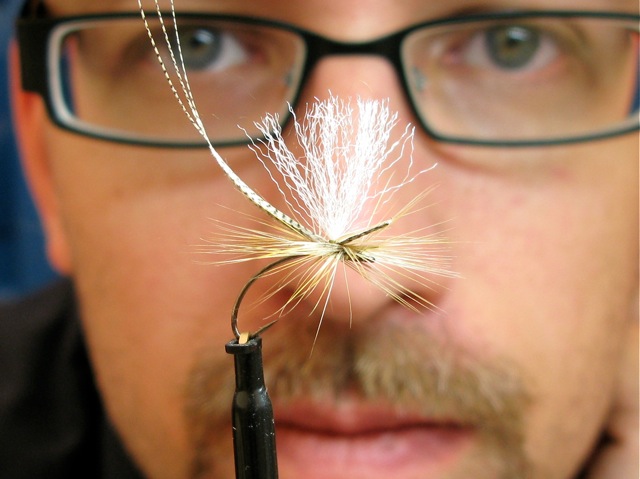 Ulf Hagstrom is a much-respected Swedish tyer and I found him more than happy to share and demonstrate any of his fly designs. His ‘Killer’ fly has a hackle tied between the body and the hook, as opposed to around the hook or the post. Ulf explained he developed the idea from an article in FF&FT by Poul Jorgensen in 2001. Interestingly, Jorgensen gives credit for this method of hackle tying to Catskill tyer Harry Darbee who he also credits with the creation of the ‘Two Feather’ fly.

Darbee first used this ‘under-hackle’ technique when he designed his Crane Fly or Daddy Long Legs. 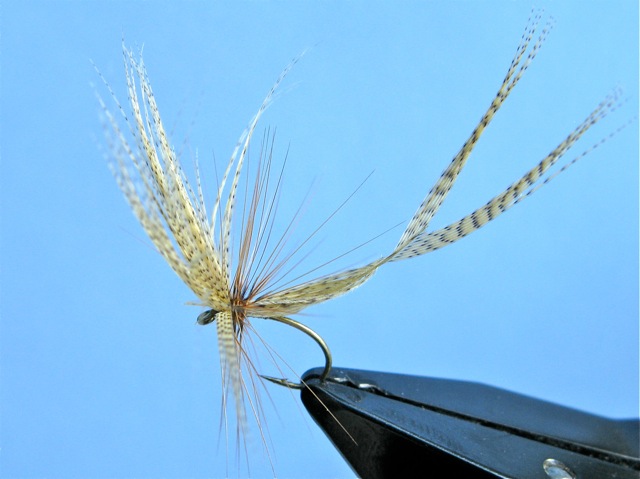 Here are the 5 simple steps for creating that fly using just two feathers.

Put a fine wire grub hook size 14 in the vice and wind the thread (I use Veniards brown ‘Sheer’) down the hook until it hangs level with the hook point. Tie in a Red Game hackle facing forward over the eye and 2-3mm back from it. This will allow space for 3 wraps of hackle. Leaving the thread in front of the hackle stem will prevent the thread slipping towards the bend as the body is formed. 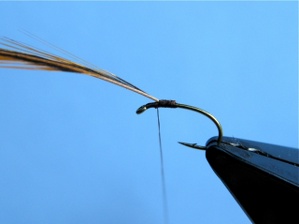 To prepare a Mallard or Teal flank feather, stroke back the fibres so that you have roughly the same amount of fibres above and below the split, as in our picture. 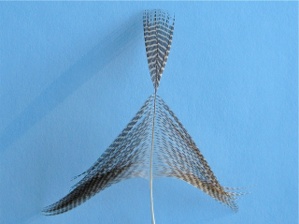 Take two loose turns around the centre gap in the feather and pull it through to form the body. When satisfied with the detached body secure with further tight wraps of thread. 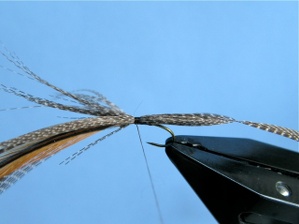 Snip out the stem of the feather. Part the remaining fibres equally and make figure of eight wraps to create the wings. 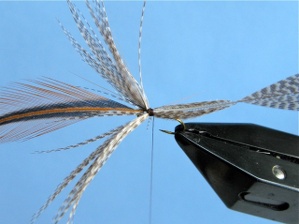 Make three turns of hackle, secure and whip finish at the eye. Darbee left his wings long but clip them at an angle if you prefer them to be more in proportion with the tail. 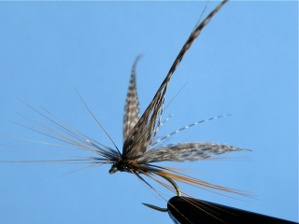 So, to pass those winter evenings, I tied up a few Crane Flies and then moved on to ‘Ulf’s Killer’. I must have tied at least fifty; I even submitted two in our local FDG tying competition. Did I win? Modesty forbids!

When the season began on our local chalk streams, I was ready with a box full of ‘Killers’ although I’d given the fly a split wing instead of copying Ulf’s ultra thin ‘blade’ wing, as I felt this would give a better profile and help floatation. I also added a small bead of Bug Bond to the underside to secure the hackle and to ensure the fly floated at just the right angle.

On May 11th at precisely 11o’clock, the May Fly began! One moment the water was calm, interrupted occasionally by a languid rise, the next, the water was ‘dancing’. I was totally spellbound. Beautiful Brown Trout of 3 to 4lbs propelled themselves into the air to catch their prize, or rolled on the surface mopping up those that were spent and trapped in the film. A voice from across the river brought me back to reality. “…You bothering today then?” It was our keeper. “Told you they’d be on…seen the big one? He pointed to a sandy area in the middle of the river and, as if on cue, an enormous fish rose and slurped down three May Flies that were clustered together. Somehow I managed to cast in its general direction but I was short. The second cast was good. The fish rose and turned away with what I can only describe as utter disdain! In the next half hour he must have eaten at least a dozen naturals, but continued to ignore my offering finally sinking to the river bed and for all the world, looking as if he’d nodded off! 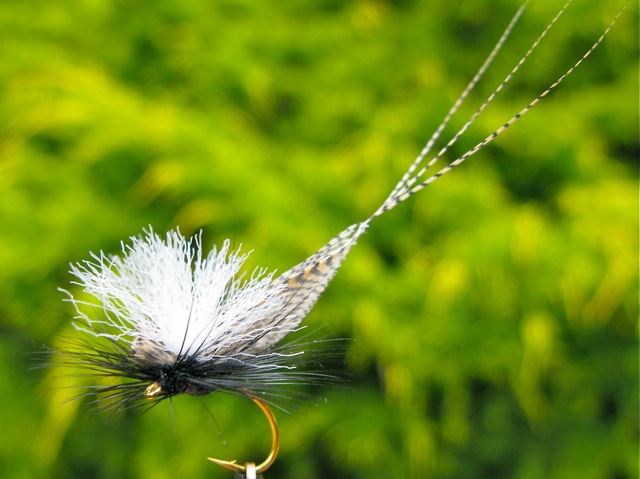 My Under Hackle Mayfly

It must have been about 4.30 when the rise once again intensified. I had caught half a dozen good fish that day but I thought I’d have a couple more casts at the monster but he’d gone! His sandy bed was deserted. I was about to leave when something like a small submarine broke surface twenty yards ahead. I crept up river and cast but he ignored my offering and took the real thing that fluttered enticingly in his path. I spent at least 15 minutes casting so that my fly preceded, followed, or joined, a small groups of flies as they floated downstream.

Finally I waited until there was a lull in the proceedings and cast a few feet ahead of him. He rose and, in mid swirl, ate and dived out of site. I honestly don’t remember much of the ensuing battle.

I recall I ran a long way upstream and an equal distance back down again and eventually, just when I thought I had him, his huge bulk slipped out of the net. After a moment or two I got him back into the net and onto the bank. My net has never been quite the same nor my pulse quite so high. He weighed 9.5lbs and was without doubt, the most rewarding fish that I have ever caught on an English chalk stream. 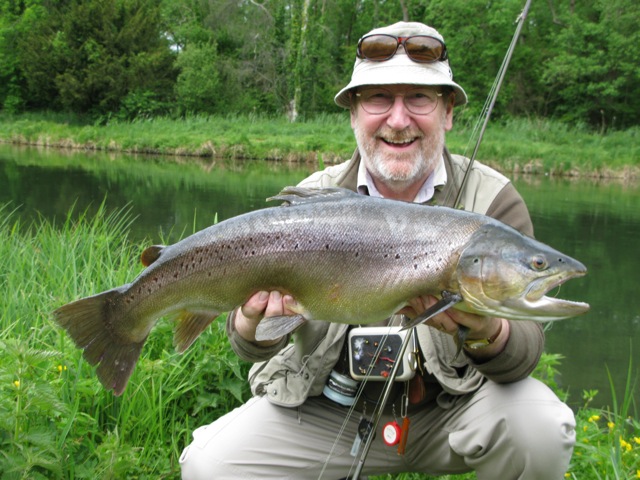 There is no doubt that Ulf’s ‘Killer’ is a great fly but it does have one drawback, in rough water it is inclined to sink. So I decided to tie a version with a closed cell foam body. I was quite pleased with it until I showed it to my good friend Ian McKenzie. Before retiring from Fulling Mill he was instrumental in working out economical ways for the Fulling tyers to tie the company’s range of Oliver Edwards patterns. Ian’s method of tying the body and tail is the reverse of my attempt and frankly, balances the fly perfectly.

Here are the step-by-step instructions for the Darbee-Jorgensen-Hagstrom-McKenzie-Sandford-Under Hackle Mayfly! Don’t let the winter months get you down. By the time you’ve tied a few dozen of these for your friends, the Mayfly will be with us!

Place a needle in the vice and be extra careful! Cut a strip of cream closed cell foam about 2-3mm wide and 10cm long. (From a large sheet. Hobby Craft 60p!) Find the centre point and push it onto the needle about 25cm back from the point. In open spiral turns tie in 3 paintbrush bristles for the tail returning the thread to the foam.

The tails should approximately the same length as the body. 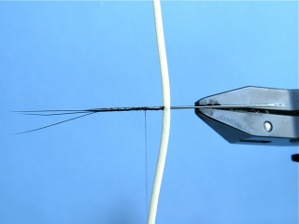 Grip the foam either side of the needle and bring the thread over in a loose wrap in preparation to make the head of the fly. When happy with the size make two firm wraps and then pass the thread between the foam, toward the point. Now make a small bed 2mm wide for where the wing will be tied in and once again pass the thread between the foam toward the point. Wrap the thread forward towards the point then bring it once over the foam to make the first section of the body. When satisfied with the size of the section add 2-3 further wraps of thread. This will be the largest section.

Repeat for each section after this making them a little smaller than the one before. Continue until you have tied 6 graduating sections in all and whip finish. Clip the thread. 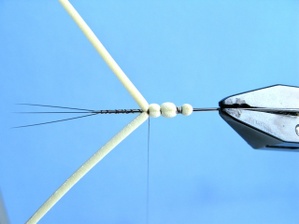 Carefully cut away any excess foam and wipe a little varnish into the turns of thread above and below each segmentation. Take a brown or black marker pen and colour in the head and mark each side and underside of the body.

Slide the body off the needle and REMOVE THE NEEDLE!

Split the tails and fix in position with a little Bug Bond or varnish. 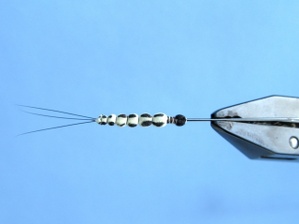 Place a Tiemco 2487 size 12, or any equivalent grub hook, in the vice. Tie in a good quality cock hackle along the side of the hook shank protruding over the eye. The hackle will be wound anti-clockwise so remove 4-5mm of fibres from the inner side of the hackle stem. Now tie on the body at the wing tie in point. This should be a little back from the eye, so the head protrudes slightly over the eye. 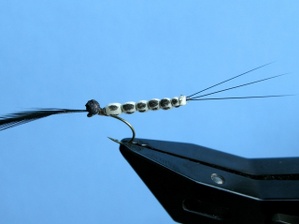 Tie in a Polypropylene wing with figure of eight wraps plus two wraps around the base of the wings to stand them up. Move the thread to behind the eye. Wind the hackle for three turns between the body and the hook shank and tie off behind the eye. Whip finish. Put a small ‘blob’ of Bug Bond or varnish on the wraps under the body. This will secure the hackle and help to balance the fly. 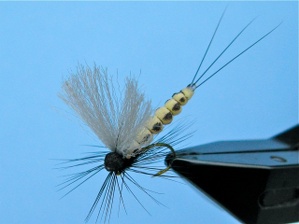