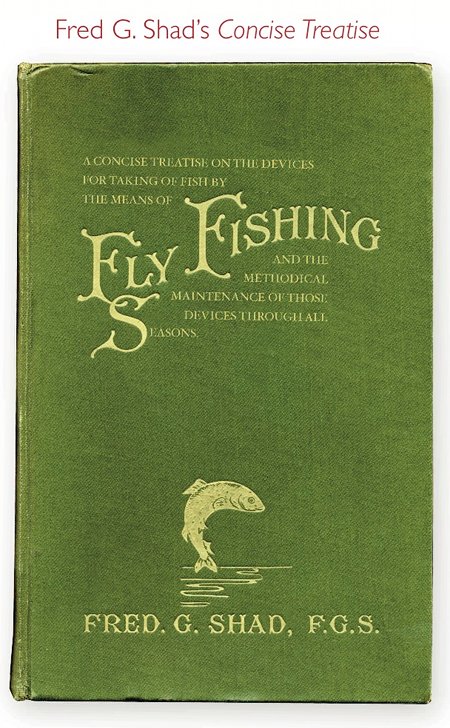 Collecting vintage fishing tackle is a game
of highs and lows: great excitement when
one finds that obscure and rare reel, and
stultifying misery when one comes across
a scarce item that is so badly distressed
through lack of care, that the finest
restorer in the land would only shake his
head as he dropped it in the bin.
Rods rotten with worm and damp.
Reels warped beyond any possible use.
Flies ‘mothed’ so badly, that only the
vaguest remnant of the original tying
remains. I’ve seen cased fish that look as
if they have been recovered from a
nuclear holocaust. Creels that crumble to
dust, because they once supplied a million
termites with a hearty meal.
Priceless brass reels, that have been
dropped and bent. And metal tackle
boxes rusted beyond use.
It is not as if anglers lack instruction on
how to care for their tackle. How many
times have you seen that ‘Let’s get our
gear ready for the new season’ article? With monotonous regularity, we are advised to administer a drop of oil here, and a squirt ofWD40 there. We are urged to check our rod rings for grooves, and our fly boxes for bugs. Lovers of cane are told to rub down and re-varnish their rods and if, perish the thought, the top section should have taken a ‘set’, expert advice suggests that one either learns to fish around corners or reverses the rod rings so that the offending section flexes in the opposite direction. If our forefathers had received such clear-cut advice, I wonder if more of their tackle would have survived. 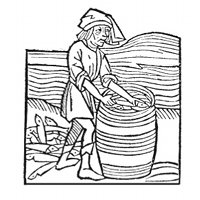 Searching through our ancient angling literature, it would appear that tackle maintenance was closely acquainted with witchcraft! Much of it is preposterous and beyond belief! The book I would recommend that gives a clear picture of how tackle was cared for with materials available at the time is, Frederick G. Shad’s privately published work A Concise Treatise on the Devices for Taking of Fish by the Means of Fly Fishing and the Methodical Maintenance of those Devices Through all Seasons. Accompanied by a Quaint Discourse on the Preparation of Edible Species as Tested by the Experience of Thirty Years.

To quote the original text would require the reader to be well versed in old English, so I have taken the liberty here of using parts of Geoffrey Barn-Cruikshank’s translation and interpretation (1928) also published privately.
On the matter of rod maintenance, Shad suggests that ‘Thy rod, when inclement weather does cause the timbers to moan, should be laid on a bed of blighted hawthorn and doused throughout one day and one night with oil of Bog Weevil. Thereafter, caressed with fine silken cloth and left to settle in airy surroundings.’
On reels, his advice is even more mysterious: ‘If a wynder be your pleasure, then at the fullest of the moon, remove your line and place your wynder in a small badger’s bladder which has been dried and soaked in warm neck oil. Your line should be renewed with plaited horse hair and a fair haired maiden’s tresses.’
Shad makes no attempt to explain how to obtain these ingredients, presumably the ‘fair haired maiden’ lived nearby and didn’t mind having her hair cut! 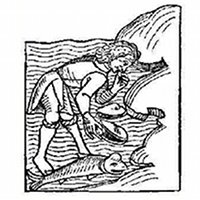 On artificial minnows, he refers to Walton’s Compleat Angler and agrees that they are best made of ‘sad French green silk’, but goes on to suggest: ‘Once a maker is found to assemble such an artificial minnow to your satisfaction, be sure to have about your person, at least one dozen examples. At the first sign of snow, wrap each one in the silver skin from the belly of a mackerel and place them, head to tail in a box of thin larch wood anointed with the flume of toad bile.’ 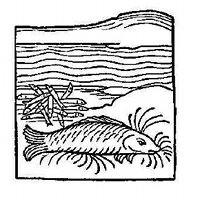 If you had the stomach for further tackle maintenance he suggested that flies ‘that are crusted and stuck with the glue of use’ should be ‘held in the grip of long tongs over a steaming cauldron of rosehip water, to which has been added a measure of sheep’s blood’.
If you consider this advice to be of a somewhat eccentric nature, his discourse on the preparation of edible fish pushes the credibility of his suggestions even further. On the preparation of chub, he suggests that ‘as Winter affords us little sport, and even less to adorn the table, be thankful therefore, if a Chub should come to your net. Dispatch him sharply and while still warm, set aside his innards.
‘Cut a branch of Elder that should be trimmed to the length of the fish, and planed flat on both sides. Anoint the Elder branch with the entrails in liberal quantity and bind to it the Chub with lengths of Rosemary. Within the cavity of the fish, place four dried newts, a plover’s egg and a smear of vole paste. ‘Allow all to cook slowly all day in Birch embers. When all is done, remove the Chub, and, with every ounce of strength at your command, throw it from you as far as you might. Now, all is ready, pour yourself a large measure of ale and eat the Elder branch.’ 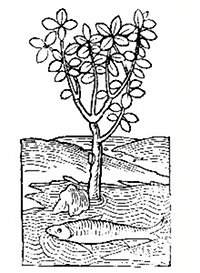 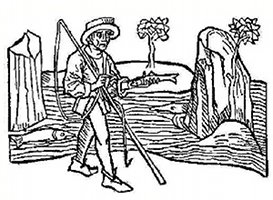 Excerpts from Shad’s Concise Treatise are reproduced with kind permission from the Snell & Fador Angling Trust.