Chris Sandford reports on how the ‘Dream Team’ won the 2011 River Test ‘One Fly’ Competition.

In 2010, I was flattered to be invited to join Chris Tarrant in Bob James’s ‘Dream Team’ to fish the River Test ‘One Fly’ competition organised by Simon Cooper’s company ‘Fishing Breaks’.
We didn’t win, so in 2011 we thought we’d have another go!

As the title suggests, the ‘One Fly’ operates on a very simple rule. You fish with only one fly, lose it and you’re out! But then comes the big question, which fly? I supplied our ‘Dream Team’ with ‘The Ducking Feadly’, one of my flies that did quite well for us in 2010.

When Bob invited me to join the team I only had a few days to come up with a pattern that would get down through the murky water into the deeper holes, and would be strong enough to survive the battering that it would hopefully receive from several large Trout.

On the morning of the competition Bob’s guide looked into the box and said “They look ****ing deadly!” So that’s what we decided to call the fly! 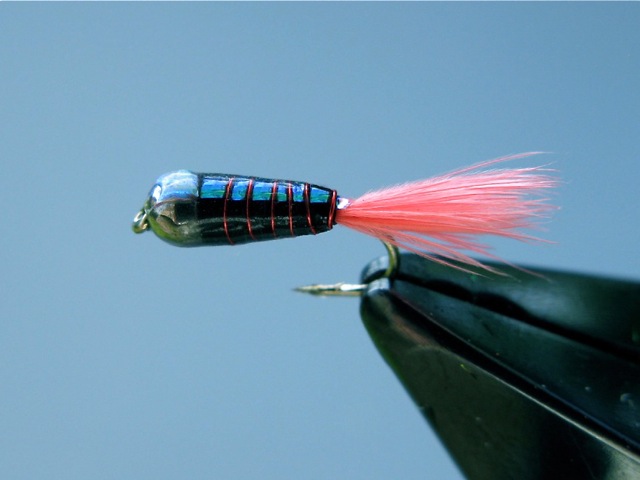 Later that day, a TV crew was filming Bob as he continually caught fish on my fly. The director asked him the name of the fly he was using. Not wishing to offend the viewing public, he pretended not to remember and asked his guide.
The guide, without missing a beat said…
“Oh that one, sir. That’s the ‘Ducking Feadly”!

The ‘D.F’ is based on a Grayling bug devised by the late Geoff Clarkson that is tied on a curved nymph hook. I simply tied it on a straight size 14, added a holographic strip down its back and gave it a pink butt so I had a better chance of seeing it as it sank down through the water! However, the secret of its survival is a coating of Bug Bond, a new resin product that dries in about 10 seconds when exposed to the beam of a special ultra violet torch.

In this year’s ‘One Fly’ the ‘D.F.’ did us proud, the team won and, thanks mainly to the fish spotting abilities of head keeper Jon Hall, who was my guide on the Moorcourt beat at Broadlands, I also managed to win the Lower Test award with the most points awarded to a single rod!

Our captain Bob James was delighted with the result and commented ‘Fishing with your buddies is good but winning with them is even better! The ‘D.F.’ is surely becoming a modern classic. It has now taken so many fish for me in so many situations. On the drop…down deep, and the takes are always really positive. What a fly…what a day!
When Chris Tarrant was asked to give his opinion of the ‘D.F.’ I knew I’d be in for a hard time. He announced to the assembled company, “Initially, like everything to do with Sandford, I was extremely dubious, but after years of disappointment and treachery, I have to say that this time, his word was as good as his bond and the Test trout found the fly irresistible”!
It was a great day, but most importantly, there was a huge round of applause when Simon Cooper announced that the participants had been most generous and that Fishing Breaks would be presenting a cheque for over £1,000 to ‘Help for Heroes’.

The ‘D.F.’ is a very simple fly to tie. All you have to decide is how heavy you want it to be. I tie it with an ordinary black 3mm metal bead, or a tungsten bead and add a little lead if the river is pushing hard and I want to keep it bumping along the bottom. 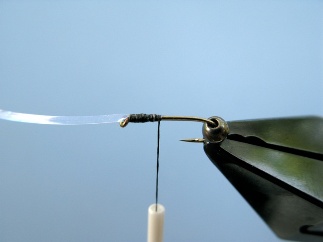 Step One:
Slip the bead on the hook, put the hook in the vice then move the bead to the rear of the hook. Tie in about an inch of the Pearl Mylar facing forward over the eye. Half hitch the thread and cut it off. 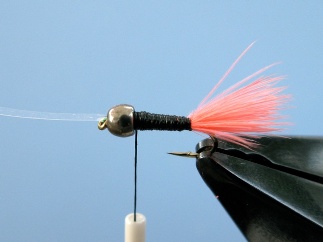 Step Two:
Move the bead forward reattach the thread and secure the bead with several wraps. Move the thread to the rear and tie in a short tail of Hot Pink Marabou and tie down the residue finishing behind the bead. This will start to give the body a nice tapered shape. 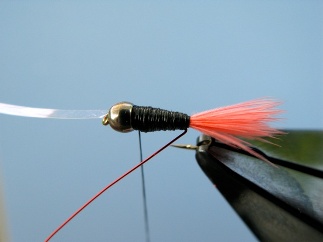 Step Three:
Now tie in a length of red wire under the hook, behind the bead and bind it down moving backwards towards the rear of the hook. Stop opposite the barb. Trim the wire excess. Continue to shape the body with the thread eventually finishing behind the bead. 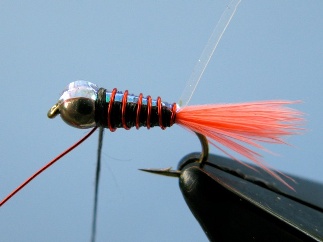 Step Four:
Pull the Mylar towards the rear of the hook and secure with the wire. Wrap the wire forward in evenly spaced turns and secure below the bead. Trim the excess of both the Mylar and the wire. 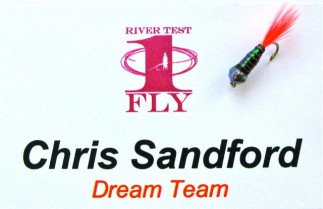 Step Five:
Coat the D.F. evenly with Bug Bond and cure for 10 seconds with the Ultra Violet Torch.
This is the fly that I used in the competition and you’ll notice that even after 6 hours fishing and 6 good fish its still in great condition.

Hopefully you have now tied the indestructible ‘Ducking Feadly’ Enjoy!